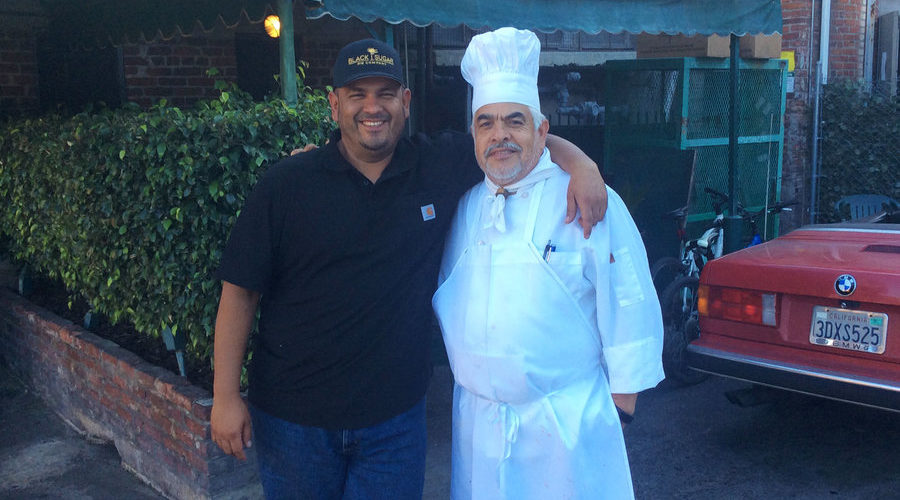 “I watched him at the grill. I learned his methods. I primarily paid attention to the things he didn’t do. And I got to understand how he did things and why things matter.”

Nolo Rodriguez is at Hollywood’s Musso & Frank Grill, ready to eat something he’s enjoyed hundreds of times over three decades. As always, he’s sitting by the restaurant’s mesquite grill, happy with the knowledge that the legendary grill man known as “The Meat Whisperer” is about to make him something that only a few other people have ever tried.

That’s one of the perks you get when Indolfo Rodriguez, who’s been working the grill at Hollywood’s oldest restaurant for 33 years, is your father.

Nolo, who runs popular Smorgasburg L.A. vendor Black Sugar Rib Company, is a meat master in his own right. When I had asked him how his dad influenced his life and career, he said he must take me to Musso & Frank for a burger. That’s the best way to understand.

The off-menu burger, actually a patty melt because Musso & Frank doesn’t have hamburger buns, is just part of a feast that has me sort of wondering how you can still be alive after eating like this over and over again. First we get bread that’s been toasted on the grill. We cover the bread in butter and dip it in au jus. Then the steak fries and onion rings arrive. Even before the patty melt comes, Nolo tells me that I need to take some cheesecake home.

The patty melt itself is beautiful simplicity. Buttered bread, juicy meat. No cheese, pickles, onions or condiments. I start to understand.

“Every time I have this burger, it’s the same flavor profile,” Nolo says. “The reason that I want you to try this burger is that it’s very simple. That’s what I love about it, that it’s so extremely consistent over 30-plus-years in its simplicity.”

So Nolo keeps things simple at Black Sugar as well.

“That’s one of the core values of Black Sugar,” he says. “Everybody nowadays is trying to be trendy. I want to be relatable. With Black Sugar, pretty much everything I do is five ingredients except for the barbecue sauce.”

As it turns out, salt, freshly cracked pepper, granulated garlic, paprika and his secret Black Sugar ingredient are often all he needs. Nolo credits his dad for making him understand the importance of not overdoing things.

“My dad’s a man of not many words, so I learned to communicate with him without trying to talk that much,” Nolo says. “I watched him at the grill. I learned his methods. I primarily paid attention to the things he didn’t do. And I got to understand how he did things and why things matter.”

During our meal, Nolo keeps repeating that his father doesn’t say much, so I have to see for myself. Here are some questions I ask Indolfo over the course of an hour.

Me: “Why does your son like this burger so much?”

Me: “Is there any secret to what you’re doing?”

Me: “The mesquite is important?”

Indolfo: “Oh yeah. The flavor of the mesquite is very unique.”

Me: “What do you think about your son’s barbecue?”

Indolfo: “The taste of the food, the flavor.”

Indolfo smiles a lot as I ask questions while he cooks. He’s not being difficult with his short answers. This is just how he is when he’s working.

But then he starts to loosen up a bit. He makes himself a patty melt, with a smaller patty and an end piece of bread.

“He won’t even give himself a fresh slice of bread,” Nolo says, marveling at his father’s refusal to waste food.

Indolfo tells me he doesn’t eat a patty melt often, but he saw us enjoying ours and decided he wanted one. He crushes his patty melt in a few minutes and goes back to grilling.

I ask Indolfo if he’s proud of his son’s success at Smorgasburg and at big catering gigs.

“Oh yeah, because he does a very good job,” Indolfo says. “He’s found his own way. I’ve tried to help him with everything I can.”

Then Indolfo and I discuss how much Nolo liked to eat as a kid. Nolo would fake being sick and have his dad take him to the hospital late at night. Once they got there, Nolo would say he was hungry and ask to eat at the burrito spot down the street. This happened multiple times, and Indolfo kept going back to the hospital and the Mexican restaurant because he enjoyed the time with his son.

Indolfo simultaneously had two full-time jobs for more than two decades. He would spend days at a non-cooking gig in a different hospital and work evenings at Musso & Frank. I ask if Indolfo had to work so much because he was always buying food for Nolo.

Indolfo once bought an off-brand pair of sneakers at a swap meet. The vendor put the shoes into a random box that had a $120 price tag.

Before Musso & Frank, Indolfo cooked at Schwab’s Pharmacy, a diner the Hollywood elite frequented. He learned how to become a restaurant cook there.

“I learned watching the other cooks,” Indolfo says. “I was a dishwasher for six months and then a busboy and then a cook.”

The way Indolfo and Nolo see it, cooking is about feel. It’s about adjusting to the circumstances. This means knowing when exactly to shovel more mesquite into the grill at Musso & Frank and ensure that the fire doesn’t die. It means tweaking the process of making barbecue when seasons change and you’re dealing with humidity. It means learning from experience to touch the bottom of a steak instead of the top when you’re checking if it’s medium-rare.

Indolfo didn’t get into specifics when he encouraged his son to start his barbecue business a few years ago. There was no reason to do that.

“He was extremely supportive, which was probably better than any technique or recipe he could share,” Nolo says.

Indolfo gave his son a little cash and told him that he didn’t want to be paid back. More important than that, he also gave his son a handwritten note saying that he was proud of him and would be there for anything he needed.

Nolo has that 2-inch-by-2-inch piece of paper in a drawer where he also puts his wallet and keys. He looks at it every single day.

Nolo’s a little sad as he thinks about how little time he has left to spend with his father at Musso & Frank. Indolfo’s 64. He recently went from five days a week on the grill to three and then to two. He’ll retire from the restaurant next year.

But Indolfo will still cook.

“He makes carne asada at home,” Nolo says. “He has this shitty little grill, and it’s like the best meat you’ll ever have. I want to buy him a $2,000 or $3,000 grill, but he wouldn’t have as much fun as he does with the $40 crap red-and-white grill he has. They last like three or four years, and he goes back to Home Depot and buys another one. It’s rinky-dink, and I love it, but sometimes the son in me wants to be like, ‘Let me show you how much I love you.’”

But then he remembers that his dad doesn’t want an elaborate grill at home. He just wants to make simple food for his family.

“And then I realize all I gotta do is give him a hug and tell him I love him and that means the world to him,” Nolo says.

It’s funny. Indolfo doesn’t say much, but he’s a sentimental man. When his family is all together, he’s prone to, all of a sudden, telling everyone that this is the happiest moment of his life. And then he gets quiet again.

Sometimes, you don’t need many words to make an impact. Spend even a little time at Musso & Frank and you’ll hear customers talk about how Indolfo is an amazing man, how he’s always made people feel special, how there’s nobody who cooks like him, how it’s impossible to vex him.

One night, there was a smart-ass at the counter who asked Indolfo if he could cook a steak rare on the inside and well-done on the outside.

Indolfo’s reply: “Will you eat that?”

So Indolfo butterflied a steak, charred the inside, put the steak back together and cooked the outside rare. The customer ate the steak.

Nolo is fortified by stories like this. They make him work harder, because he knows that being the son of The Meat Whisperer means something. So Nolo is at Smorgasburg three hours before it opens every Sunday, barbecuing Black Sugar’s meat on-site.

Nolo also has a full-time job at the Metropolitan Transportation Authority. He gets his drive, of course, from Indolfo, his Mexican immigrant father who’s “worked for 30-plus years, hustled two jobs, set the standards high.” Actually, it’s been way more than 30 years: Indolfo, who was 2 when his father died, was working at a liquor store in Mexico when he was a child.

Nolo’s got two sons of his own. They’re 10 and 7. When people ask them what they think of their dad’s barbecue, they always say, “It’s the best.” Nolo is so proud when they do that. He doesn’t know if his sons will work in the food industry, but he knows he’ll support whatever they do. After all, when Nolo was 6, he was already cooking at home, standing on a chair to reach the stove as he made scrambled eggs. His mother worried that Nolo might burn the house down. But Indolfo was cool with his son in the kitchen. Nolo wanted to cook, so why not let him cook?

And anyway, Indolfo isn’t exactly worried that anybody will ever supplant him as the best cook in his family.

“C’mon, dude, people call him The Meat Whisperer,” Nolo says. “I want to get that title. Really, that’s a cool title. Hopefully, I can get to his status. What I mean by that is the level of respect earned. That’s what matters. You sit here long enough, you’re going to meet so many people saying this guy is such a great guy. That’s more important than whatever meal he can cook for you. That’s what I want.”

During our meal, the customer next to me at Musso & Frank’s counter figures out that Nolo is Indolfo’s son.

“You were 8 when I met your dad,” the customer tells Nolo.

Indolfo’s at the grill, smiling as he puts garlic into a filet mignon for a custom order, not saying anything but conveying everything. 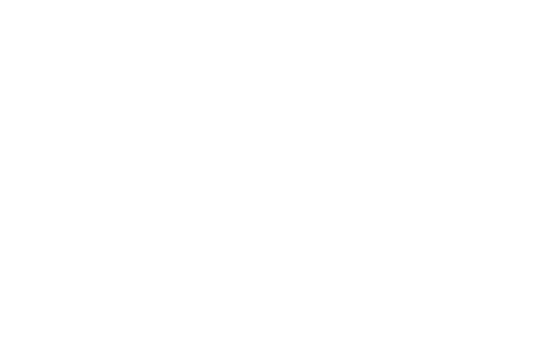